The Gene Editing, Transduction and Nanotechnology (GET iN) Core is directed by Irina V. Budunova, MD, PhD and Managing Director Pankaj Bhalla, PhD. The major objective of the core is to provide innovative customized solutions for cell engineering and gene expression modifications for in vitro and in vivo applications, including:

Ordering is done through NU Core, and cost information is available via our core price sheet. Services include:

The GET iN Core has tested and currently offers a variety of lentiviral expression vectors for protein and shRNA expression and the delivery of transcription factor reporters. These vectors are both commercial and internally acquired from core collaborators and patrons. The DNA/RNA delivery core offers vector maps and sequences and consults on approaches for cloning in the available vectors. Below you will find a short discussion of the vectors available from the GET iN Core.

The core also carries lentiviral expression vectors that express different antibiotic resistance genes such as neomycine, blactocidine and puromycine. Therefore, if available, the core can offer generation of cell lines and primary cells stably infected with two and three proteins.

Lentiviral vectors for expression of shRNA/miR 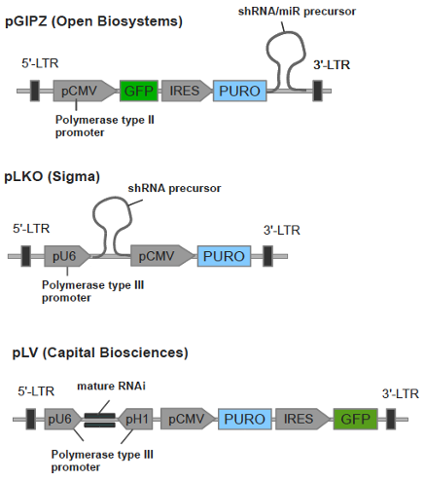 The core has successfully used shRNA expressing vector from several major companies such as Sigma, Open Biosceinces and Capital Biosciences, that offer self-contained libraries of shRNA clones pre-cloned in their proprietary vectors. 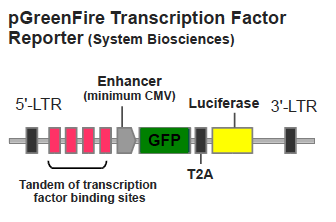